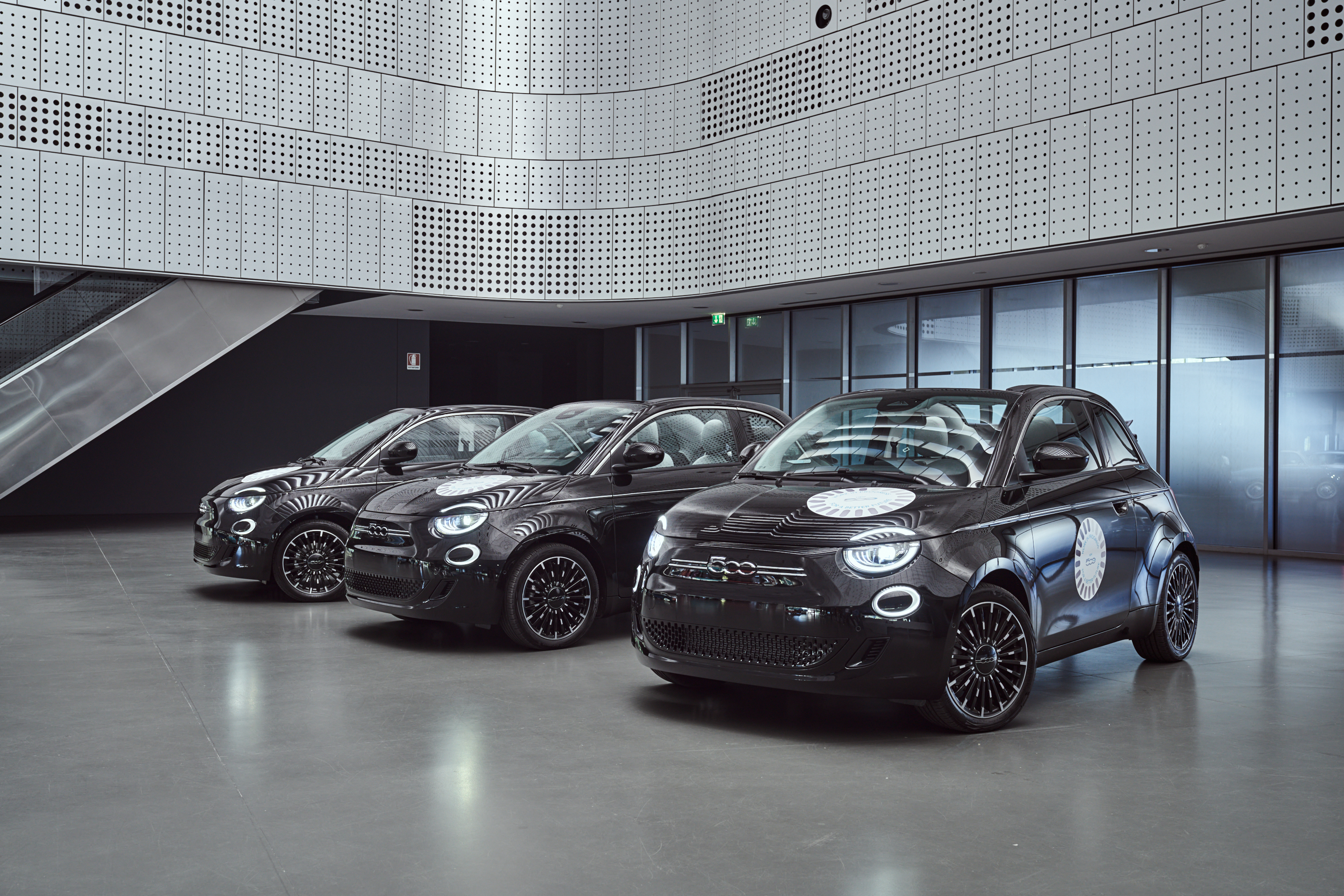 Take a walk around your neighbourhood, and there’s a very good chance that you’ll see a Fiat 500. It’s likely one of those off-white ones with the Italian tricolour stripes, parked in a jauntily disrespectful way and still looking eye-catchingly brilliant despite being as common as rodent poo and bearing the scars of a decade and more of haphazard ownership.

It’s no small matter, then, that you’re looking at an all-new successor for a car that is 13-years-old and has sold more than two million examples globally. The imaginatively named New 500 brings pure-electric power to Fiat’s dinky fashionista, courtesy of a 42kWh battery and 117bhp electric motor that powers the front wheels.

Underneath is a new EV-specific platform. It was developed by Fiat before the (still ongoing) merger with PSA was confirmed, and is a scalable platform that houses the water-cooled, Samsung lithium-ion batteries along the floorpan – in the 500’s case, slightly towards the rear of the chassis with a concentration of cells beneath the rear seats. 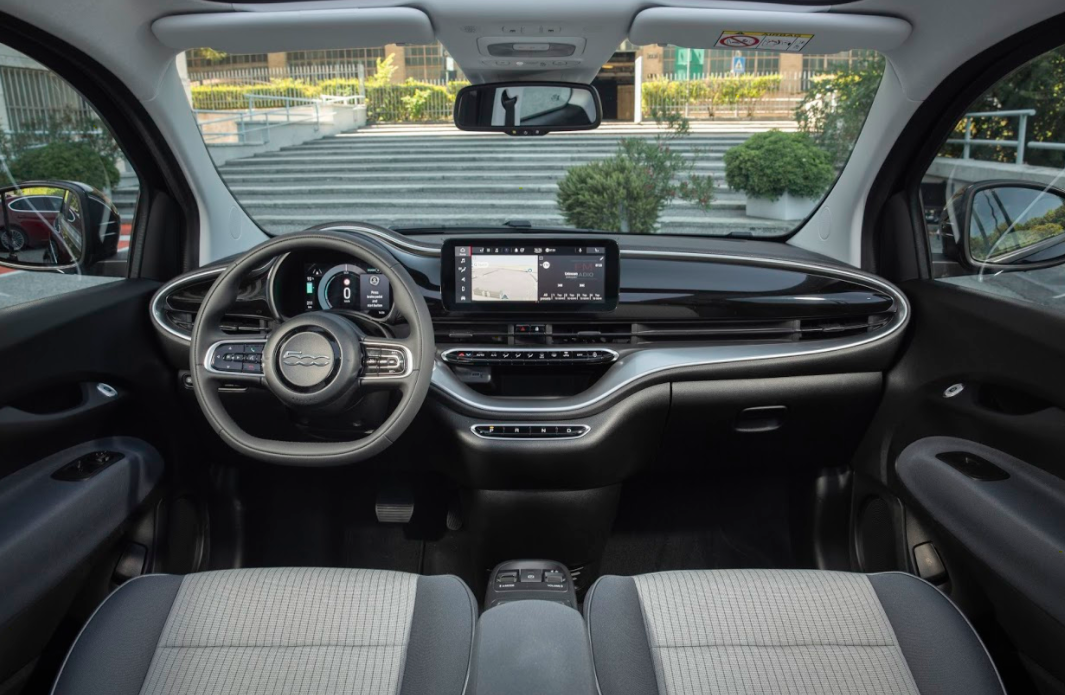 The new underpinnings have grown a bit compared to the existing 500, which will continue to be sold alongside the New 500, offering a petrol alternative to the electric version for the foreseeable future.

If plug-in is what you’re after, you’re getting a 500 that’s bigger by some 6cm in width and length, and has also gained a 22mm longer wheelbase. That’s resulted in more room inside, which is great news since the ICE 500 (which we’ll refrain from calling the OId 500) is far from commodious even by small car standards.

As a result, the New 500 now offers more shoulder room inside as well as much more seat and wheel adjustment, so the Fiat New 500 is now comfortable for normal human-sized humans even on a longer journey, which couldn’t be said of its predecessor.

You might well be willing to undertake a long journey in the New 500 given its official WLTP range of 199 miles, and an 85kW peak rapid charging speed. That results in a 10 – 80% top-up in around 35 minutes if you can find a CCS ultra-rapid charging station of 100kW or more, or around 30 miles of range added in 5 minutes. Currently, most rapid charging stations on UK motorways are 50kW, which will do the same 80% top-up in around an hour, while a 7kW home wallbox will fully charge the New 500 in around six hours. The ‘My Remote’ app also allows you to control your charging and even nav route from your phone.

We’d still recommend that you plan your charging stops in advance of a long trek in an EV, but with the Fiat offering usefully more range than chief rivals such as the Honda e and MINI Electric there’s a good chance that a lot of motorists could live with the Fiat New 500 as their sole car. Which could go some way towards justifying the price.

Orders open in the UK in October 2021, but only for the top-spec Convertible la Prima that we’ve driving here in prototype form around Turin. That’ll set you back £29,000 after the £3000 government grant, while a hatchback la Prima follows not long after and will cost £26,995.

Wait a few months more into 2021 and lower-spec versions of the New 500 will start to arrive, potentially bringing prices down as low as £22,000 – although this could be for a smaller-battery, lower-range version if the knowing smiles of the Fiat executives were anything to go by as they suggested we “wait until October”, when asked about smaller battery variants.

That puts it into contention with everything from the VW e-Up! and co, through to the posh-but-pricey Mini and Honda that we’ve already mentioned. And I tell you what, the Fiat’s got a good chance of mopping up a lot of sales from both ends of that spectrum, going on the evidence of our Italian pre-production experience.

For a start, just look at it. The New 500 is unmistakably evolutionary, yet is also distinctly different. Those full LED headlights that bi-sect the clamshell bonnet are the most striking new feature, but there are plenty of neat touches including protruding ‘torpedo’ side indicators that hark back to the iconic 1957 Fiat 500. The vent-less grille also has design roots in the rear-engined original.

The interior also has plenty of retro features, from the rounded dash architecture to a central cubby between the front seats that Fiat’s vice-president of design, Klaus Busse, told us: “lends a more romantic feel and makes it feel almost bench-like”. Those retro details are tempered with super-modern touches like push-button door releases and upholstery that’s made from recycled ocean-waste plastic, and it all combines to make the 500 feel grown-up yet still cheerful and characterful.

And finally, it feels up-to-date as well. Mostly thanks to the new Uconnect 5 infotainment system, which perches a 10.25-inch touchscreen on top of the dash as a window to Android Auto and wireless Apple Carplay. Two phones can be linked simultaneously, and other standard features include TomTom satnav, Bluetooth, DAB, USB connections, wireless phone charging and over-the-air map updates. There’s even the option to add Alexa’s dulcet tones and impressive voice control abilities to the system.

Our prototype car’s touchscreen worked very well and promises great things for screen responsiveness and graphics, if some slightly fussy menu layouts. The systems we used weren’t the finished article so we’ll refrain from delivering a final verdict yet - let’s just say that, prototype or not, this system is the Millennium Falcon to the older 500’s bi-plane. 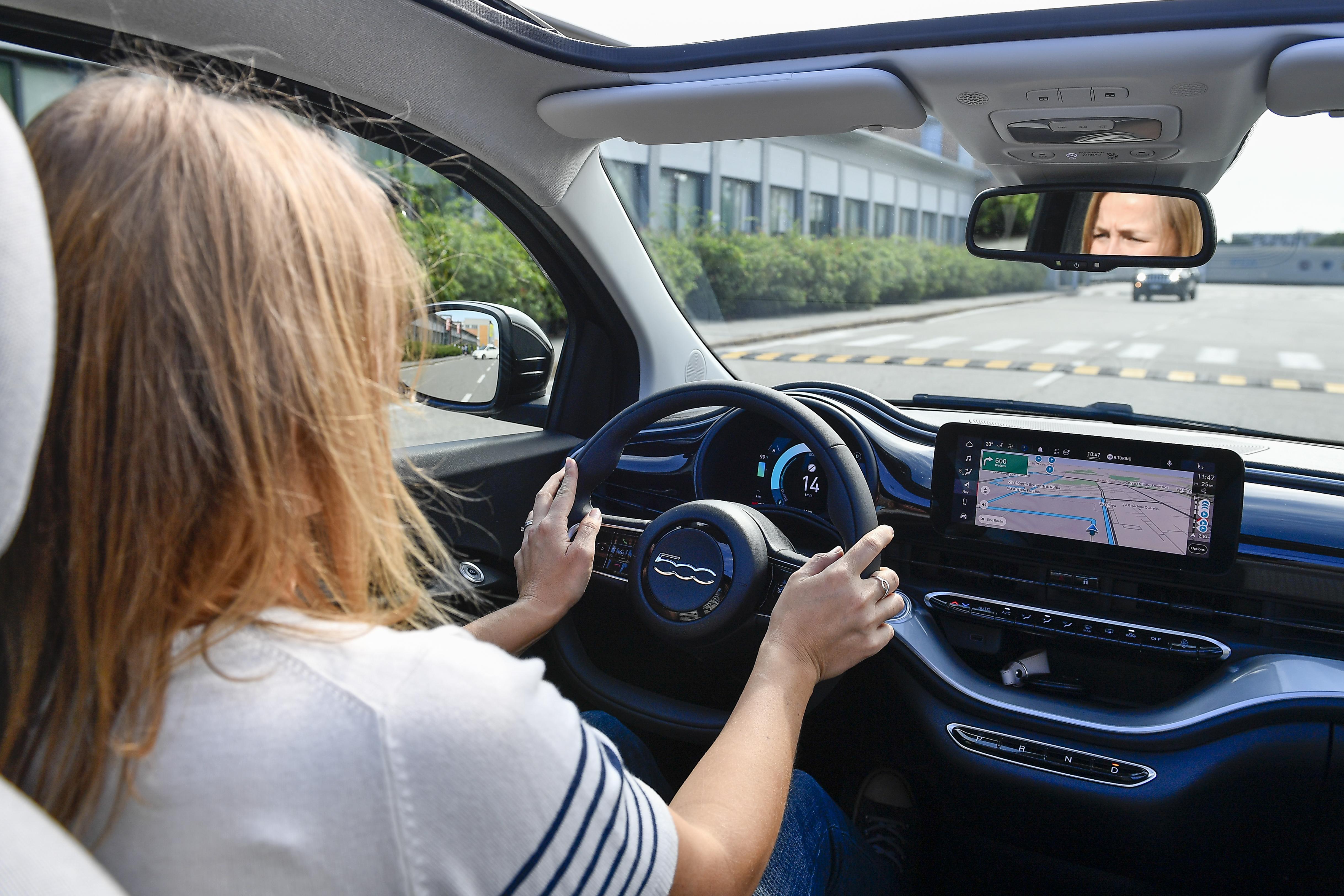 The way the New 500 drives is just as refreshingly modern and future-appropriate. Although 117bhp doesn’t sound like much, the 220nm of torque gives it fun, zippy pick-up off the line, and the seamless ebb and flow of acceleration that you get with single-ratio electric drive is just ideal for a wieldy city car like the New 500.

And it is wieldy, too; light steering and a turning circle of 9.6m means that you can execute cheeky u-turns or navigate awkward car parks with smug ease, although in the Cabrio the terrible rear visibility (literally non-existent if you have the pram-style hood scrolled all the way down) can be off-putting in tight quarters. At least the 360-degree parking camera that la Prima models get goes a long way to helping out with visibility.

Our main issue with the way the New 500 drives is its ride comfort. Although the damping softens the worst of the bumps around town, you get a lot of chatter over coarse surfaces and high-frequency creases in the road, and the short wheelbase will hop and thump over big potholes and the like. It’s unlikely to be a deal-breaker, and our cabrio’s 17-inch wheels certainly won’t have helped - the smaller 16- and 15-inch wheels that will arrive on cheaper models will likely make for more relaxing about-town transport.

Three drive modes are offered, which also control the two brake regen’ modes. Normal offers a very mild regenerative braking setting that is barely noticeable and lets the New 500 glide quite freely off the throttle. Range mode and the delightfully-named Sherpa mode both deliver one-pedal driving, which – as on the Nissan Leaf and Honda e – is a setting designed to remove the need for the brake pedal around town. It’s said to increase potential range and efficiency by up to 30%, with Fiat reckoning that in extreme circumstances you could get 290 miles from the 500 in Sherpa mode (when air-con, power and top-speed are all limited). 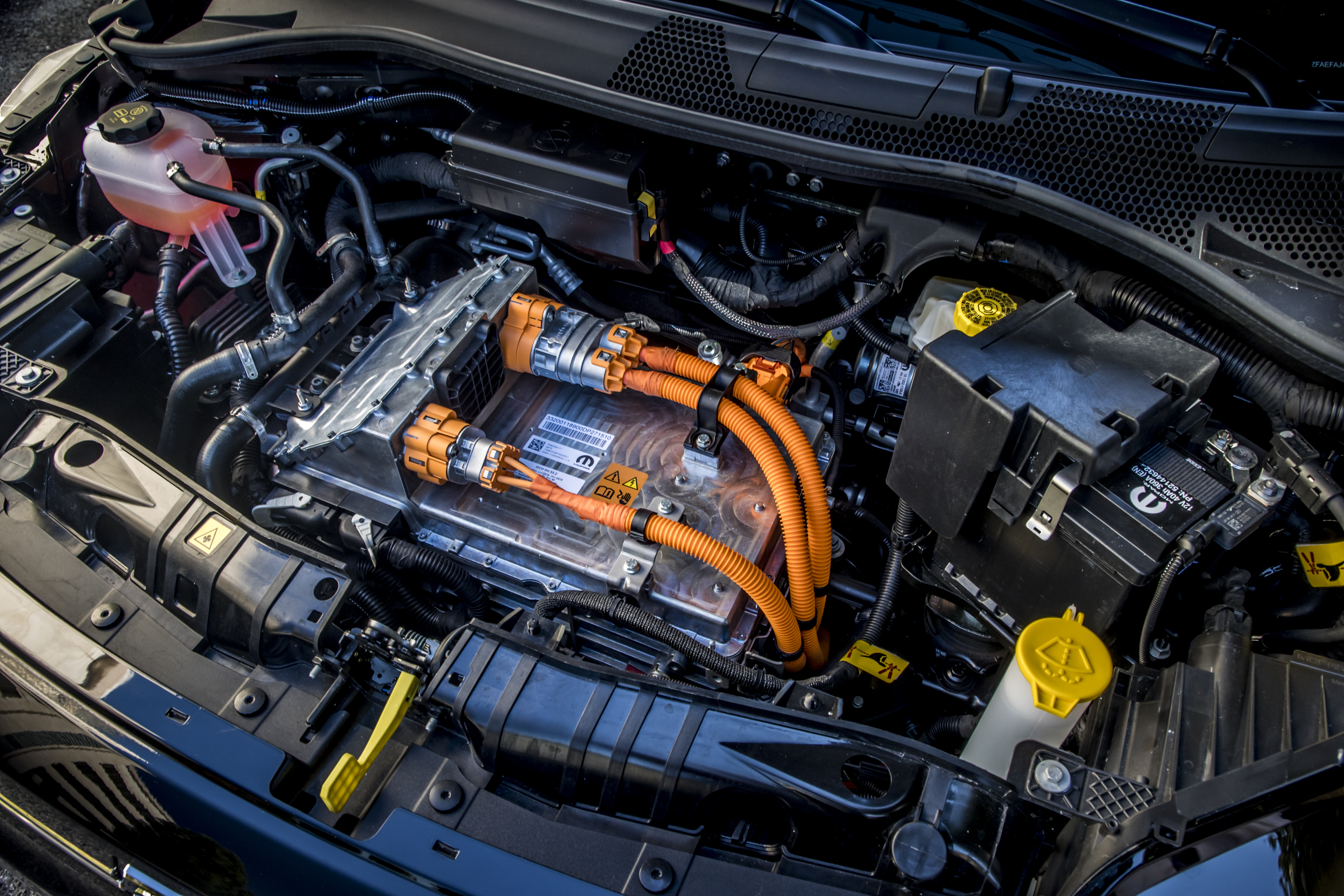 Our car was reading a maximum range of around 170 miles on a route taking in mostly fast-flowing urban traffic, so even in Sherpa we reckon you’d struggle to get that sort of range unless you do a significant portion of it behind a tow car. Even so, the one-pedal drive mode in the 500 is quite easy to judge and you can comfortably negotiate sticky urban traffic on the throttle alone. We do prefer to use the ‘proper’ brake pedal for delivering more easily judged response when coming to a complete stop.

Overall, the New Fiat 500 is a fantastic evolution of a car that’s as much national treasure as transport – arguably as much in the UK as in Italy, given how much we love the big-eyed 500.

Sure, it’s unlikely to win favours with those who carry rear passengers (even children) very regularly, since the back seats are pretty cramped. The boot space (in the convertible, particularly) is very limiting, too, even if it does have underfloor space for one or other of the standard Type 2 and three-pin domestic charging cables – you won’t get both under there.

Yet, given the range and equipment on offer the New 500 still represents decent value in the context of its rivals, especially when those cheaper variants materialise. It’s a classic, made modern and tech-savvy without losing its classless appeal and aching ‘want one’ desirability. And if that doesn’t sell, then we don’t know what will. 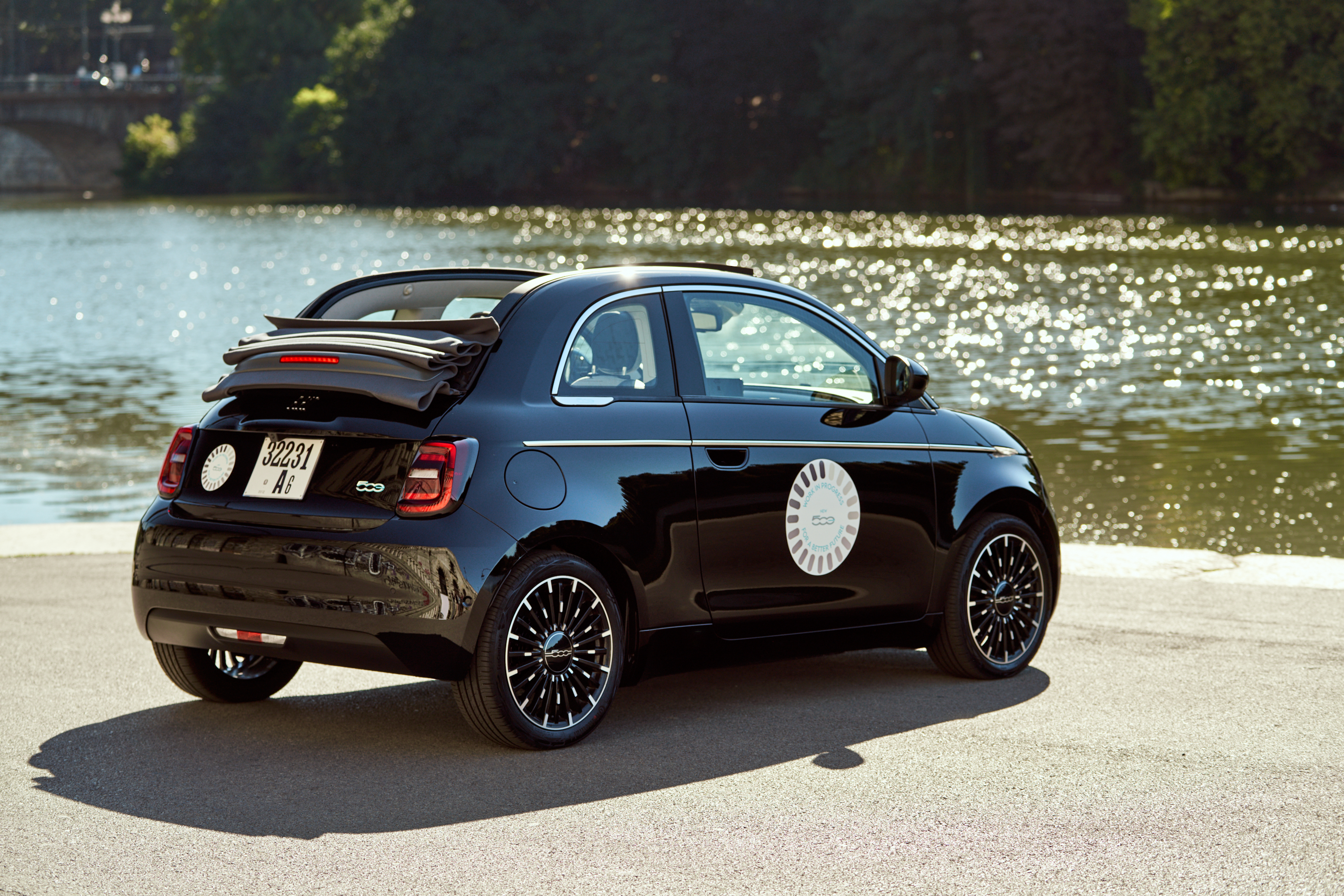